Adelaide, Prepare Yourself For Nutella-Palooza! 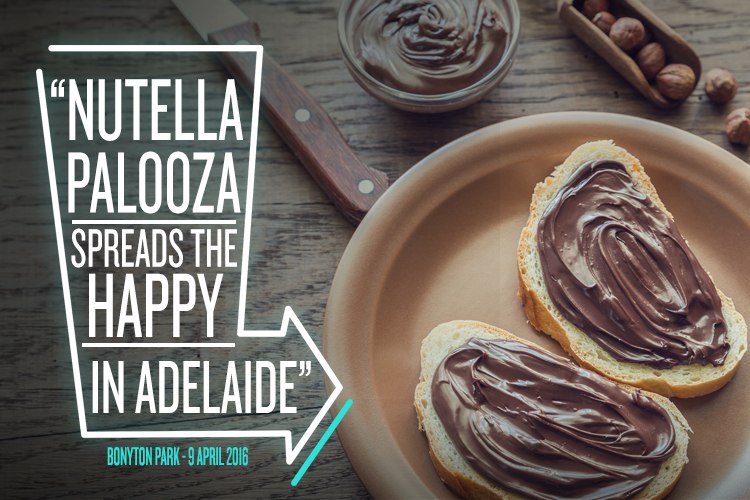 By now, many of you will have heard about Nutella-Palooza – a joyous event dedicated to celebrating the joy that is Nutella. Described as the brainchild of a group of die-hard Nutella fans, the event will feature cooking demonstrations, baked goods, food trucks, and much more.

There are some glorious and long-time food experts organising Nutella Palooza: David Porcaro, Tash Weggery, and Dougal McFuzzlebutt (yes, we were assured that was his real name). Event Director, David, is the owner and operator of the cunningly named Delectaballs (apparently serving the best meatballs in Adelaide – and who are we to disagree!). Dougal is the man behind McFuzzlebutt’s Manchen (we really love this guy’s name). And the lovely Tash is a dedicated and self-titled InstaFoodie.

We took the time to speak to Tash to find out a little bit more about Nutella-Palooza.

What inspired you guys to come up with the idea of a Nutella festival?

It began as an innocent evening with David and a group of friends sitting around after a lazy Saturday afternoon. They had begun to try various brands and varieties of chocolate spreads, after some vigorous and heated debate, Nutella won the day.

David then thought ‘I wonder who else would do this?’ ‘Who else loves Nutella this much?’ David mentioned to me he thought there should be some sort of dedicated Nutella event and before he’d even finished I said “OK, I’m in let’s do this”.

He posted up a question on his social media accounts asking if people would attend a Nutella event. The response was clear, YES they would and it just took off from there.

How did you come up with the name?

Nutella-Palooza, the name, was the result of a day David spent at a wine tour with some friends. Throughout the day they were shouting out random names for the event. The Nutella Festival, Grand Nutella Jubilee, Spread The Happy Celebration and many others.

Though none of them recall who came out with Nutella-Palooza, they do all remember having a good laugh at the name and thinking, this sounds like something they want to go to.

What does Nutella think about the event?

Right from the start, when David and I started coming up with ideas, we contacted Ferrero Australia (Nutella) to get their permission first. Without it we may have had to call the event a ‘Hazelnut Chocolate Spread-Palooza’.

Although this is an independent event and not funded by Ferrero, we hope that they will see it as a great promotional opportunity and the benefit of us running the event so that we can hopefully run it again, possibly even in other Australian cities or countries.

What has the public reception been like so far?

People have shown a lot of interest locally in the event, but we have also had a lot of people wanting to make the trip to Adelaide. We have no doubt this will be a great way to promote South Australia just as much as the gooey hazelnut spread.

What are you looking forward the most about Nutella-Palooza?

I’m excited to see what insane concoctions the stall holders create. Part of our job will no doubt be trying everything, for quality assurance purpose of course. The event is family friendly, so we are looking forward to providing a delicious, fun and entertaining environment for everyone to enjoy a day out in this fantastic city of Adelaide.

Can you give us any hints about who or what is going to be at Nutella-Palooza?

Local and interstate bakeries, chocolatiers and businesses have been asked to apply for sites at the festival to sell scrumptious Nutella inspired products.

We will also have a variety of South Australia’s best food trucks onsite to serve up savoury meals for those who may not have such a sweet tooth. We are currently working with a number of celebrity cooks and chefs, but until we have done our due diligence and have contracts signed, we are unfortunately sworn to secrecy, but all details will be revealed soon...

Also for the adults we have Nutella Beer and Nutella cocktails that will be exclusive to the event!

Is there anything you’d like to tell our readers?

We are excited that so many people are interested in the event and hope everyone can come along and help us ‘spread the happy’!

Well, there you have it folks. Are you drooling yet? No doubt, whatever happens will be amazing so make sure you mark this in your calendars!

Nutella-Palooza will be held at Bonython Park in Adelaide on the 9th April 2016. Head to the Nutella-Palooza website to find out more. Can’t make it to Adelaide? No problems! Check out our top picks for Nutella delights in Sydney, Melbourne, Brisbane, and Perth!