What’s Happening in Sydney This June 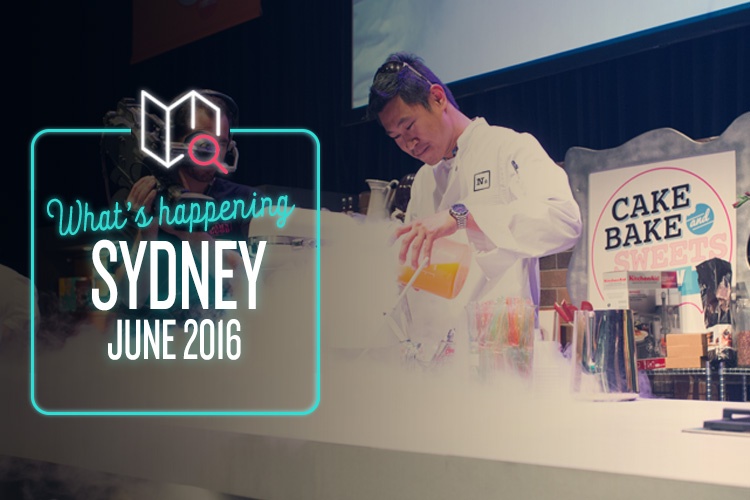 Be seen at Sydney’s trendiest shows, events and festivals this June.

Diets are boring. Bring your sweet tooth to this year’s Cake Bake and Sweets Show at the Sydney Showgrounds from June 3 to 5 for everything you’ve ever wanted to learn, buy, watch, try and drool over in the baking world. Hometown favourite and king of the pastries, Adriano Zumbo, will be doing demonstrations, and Spanish-born chef and owner of the MoVida restaurants in Melbourne and Sydney, Frank Camorra, will be talking about his inspiration. The Canberra café pioneer of the FreakShake, Anna Petridis, will also be shaking things up, and there will plenty more food personalities to see. Try your hand at baking or decorating with workshops and classes, or just wander around sampling one of everything – after all, weekends are cheat days, right?! Find out more

This one is a no-brainer. Sydney’s hippest art space, Carriageworks, is hosting Curve Ball – a new festival bringing together fresh electronic music with some incredible video art and lighting installations. As part of the Vivid Festival, Carriageworks’ post-industrial space will host a completely immersive sound and visual experience set to pumping beats from the likes of ZHU, Cosmo’s Midnight, Nicole Millar and heaps more. Don’t miss out on this one-night-only event and snag yourself some tickets ASAP before they sell out. Find out more

Known as one of the best film festivals in the world, the Sydney Film Festival is on once again. This year there will be exclusive premieres, world films, award-winning documentaries, shorts, and animations and so much more. The jam-packed program includes a spotlight on Korean films, European female filmmakers, freaky and offbeat arthouse gems, and a selection of Martin Scorsese’s best work as chosen by beloved film connoisseur David Stratton. Be sure you don’t miss the gourmet cinema choice for this year, as you delve into the incredible dishes made when world-renowned restaurant Noma opened a pop-up in Tokyo, followed by a stunning meal at the three-hatted Sydney phenomenon The Bridge Room. Find out more

These days, the world of nerd-dom is not the exclusive lair of awkward comic book geeks who live in their parents’ basements. With superhero blockbusters beating box office records every other week, the world of sci-fi has opened its doors to a much wider audience than ever before. For one weekend a year, nerds from around the country converge to indulge in their deepest obsessions at Supanova Pop Culture Expo. This year you can meet Buffy legends James Marsters and Julie Benz; Charmed stars Shannen Doherty, Holly Marie Combs and Brian Krause; The Lord of the Rings actor Sean Astin – and many, many more. There are also activities, a cosplay competition and everything else that will make your nerd brain explode with glee. Find out more

What’s Happening In Sydney This July

What’s Happening In Hobart This July

What’s Happening In Perth This July