Kansas City Shuffle Takes Us To Dumpling and Beer Paradise 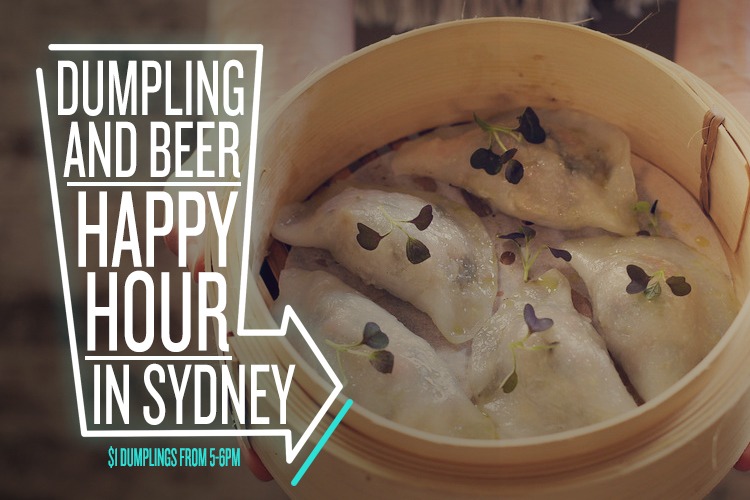 Do you like dumplings? How about beer? If your answer to both is a resounding ‘YES’, your Christmas present has come early this year! It’s called Happiness Hours and it’s being offered by the clever folks at Kansas City Shuffle.

Located in the space just next door to Kansas City Shuffle, you’ll find a funky, kitschy retro Bruce Lee inspired pop up that does two things and does them phenomenally well: dumplings and craft beer. From 4:00pm every Wednesday – Friday, you’ll be able to stuff your face with delicious delicacies like Xiao Long Bao, prawn dumplings, pork buns and spring rolls. And, you can do this all in a place that’s crammed full of Bruce Lee figurines, waving fortune cats and Chinese lanterns.

You wanna know the best part though? During dumpling happy hour (between 5-6pm) dumplings will be just $1! That’s right – you can chow on down on some seriously delicious noms for just a gold coin and wash them down with some cool craft beer from the epically awesome guys at Young Henry’s too.

We spoke with the man behind the dumpling, the owner of Kansas City Shuffle, Ben Sweeten.

Hi Ben, thanks for taking the time to chat to us! Can you tell us a bit about yourself and how Kansas City Shuffle got started?

I’ve always been in hospitality. I actually used to wash dishes and make sauerkraut at a German restaurant when I was 11. Then I became a barista and entered The Barista Championships in NSW.

I love coffee; I love everything about the industry so I opened my first café when I was 22. I’ve opened seven since then and I’m now 32! The pivotal point had to be when I was working at Proud Mary in Melbourne. I came back to Sydney having relearnt my trade.

I then opened Joe Black and Kansas City Shuffle because I saw this amazing space in The Rocks. It was such an iconic space that could never really be replicated.

Your usual menu has great dishes like the smoothie bowl, fried chicken sandwich and beef brisket and waffles. What made you want to venture into the world of dumplings and beer?

I just love dumplings! I absolutely love dumplings and beer. I’ve got a bar next door just waiting to be used so I thought, “Why not do a dumpling and beer pop up? I reckon other people love dumplings”… and it turns out they do!

That’s definitely true! Everyone loves a good dumpling. The space has a fantastic retro Chinese restaurant feel. Where did you find inspiration when choosing the décor and why did you choose to go with a Bruce Lee theme?

I love Bruce Lee (my favourite movie is Enter the Dragon). I just think he’s a really cool Chinese dude who made it in the Western world.

I also love that old kitsch style of Asian restaurant. You know what I mean? I don’t care about how nice the place is or how much money they’ve spent. It’s all about the food, the offering and the culture. Sitting down and sharing a meal around the Lazy Susan. That’s what it’s all about.

You really can’t go past good food. But something that does help is good beer! We’re pretty excited about the fact that you’ll have Young Henry’s on tap. What do you love about working with them?

I love their passion for beer. It’s reflective of our passion for coffee and food. They’re boutique and they take a lot of care with us. They just love coming in and chatting – we’re all good buddies! They’re always coming up with loads of cool offerings and they’re just great to deal with – it makes a massive difference.

Why do you think dumplings and beer go so well together?

You know what? I think it’s that the end of the day, you just want a beer and some easy food. It’s more timing that anything else. End of the day. Nice cold beer. Dumplings. You know it’s not good for you, but you know you want it.

What goes into creating the perfect dumpling?

One of our guys worked at Din Tai Fung and I think it’s just their passion for it. For making great dumplings.

You’ve got some amazing dumpling options, but what’s your favourite item on the menu?

Definitely the Pork Xiao Long Bao. It’s spelt with the ‘X’ – that makes it better. Spell anything with an ‘X’ and it makes it cooler!

We’ve heard that Happiness Hours will be running for 12 weeks but you’ll also be developing a permanent bar/restaurant concept. What can we expect from that?

I can tell you that it will be consistent with my café as far as coffee goes – so something to do with coffee. Think espresso martinis. When you’re good at coffee like we are, it just makes sense. And because we used to be in the Cadbury’s Chocolate Factory, we have a Cadbury Chocolate Martini. It’s actually on the menu at the pop up!

We can’t wait to check it out. When you’re not enjoying the scrumptious food at Kansas City Shuffle, where do you like to go for a good feed?

I love Mr Wong for food! I go there for food so often, it’s not funny. I just love the Xiao Long Bao.

Happiness Hours will be running until mid April. Make sure you check out their Facebook page to find out what comes next!