KIT KAT Studio is Staying in Melbourne for Another Three Weeks! 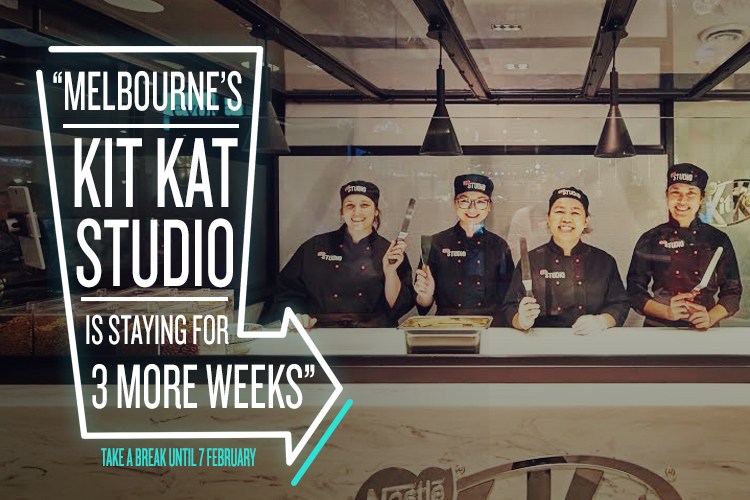 Where: Ground Floor, Melbourne Central, 211 La Trobe St
When: Every day from 10am until 7th February 2016 (visit the store for more details)

Throw up your hands and rejoice fellow Melbournians because we’ve got some fantastic news for you. Unless you’ve been living under a rock, you’ll probably know that KIT KAT opened a splendiferous, chocolate-delighty, finger-licking bastion that is the KIT KAT Studio not too long ago. In case you were living under a rock, here’s the low down.

Alright, now that you’re all caught up, here’s the best part…

If you missed out on living the dream of making your own chocolate, here’s your chance. The KIT KAT Studio is hanging around for another three weeks!

Yup, you heard us correctly. Originally slated to pack up on January 17, the KIT KAT Studio will now be gracing our tastebuds until February 7. That’s an extra three weeks of chocolatey delight!

We spoke to Chris O’Donnell, Nestlé Confectionary’s Head of Marketing, about some of the creations he’s seen and boy do they sound good.

Why have you decided to extend the KIT KAT Studio?

It’s been a huge success since the very first day, with no sign of letting up, so we wanted to give as many people as possible the chance to come down and make their own KIT KAT.

What are some of the best creations you have seen?

We’ve had some incredible creations, particularly as part of our Flavours of Melbourne competition where the winner came up with a delicious brownie, pretzel and salted caramel combo that we’ve actually been selling in store. It’s been flying off the shelves. It’s back on sale from 25th -31st January, so visit the store to pick one up.

What is your favourite KIT KAT creation?

There are so many amazing creations – every single one is amazing. One of the best combinations is salty, sweet, chewy and crunchy! Try rich milk chocolate, salty pretzels, brownie & salted caramel popcorn for an amazing break.

What has been the best part of this experience?

Just seeing how excited people have been to be able to create their own KIT KAT flavours. It’s the first time in the world we’ve done this so it’s awesome to kick it off in Australia.

Will the KIT KAT Studio be popping up in any more Australian cities?

There are no plans at this stage – but you never know where KIT KAT Studio could pop up next.

Nearly 40,000 KIT KATs have been sold so far, so it’s safe to say that the Studio has been a raging success. Well, what are you waiting for? Get creative on your next lunch break Melbourne! Just promise you’ll let us try it OK?