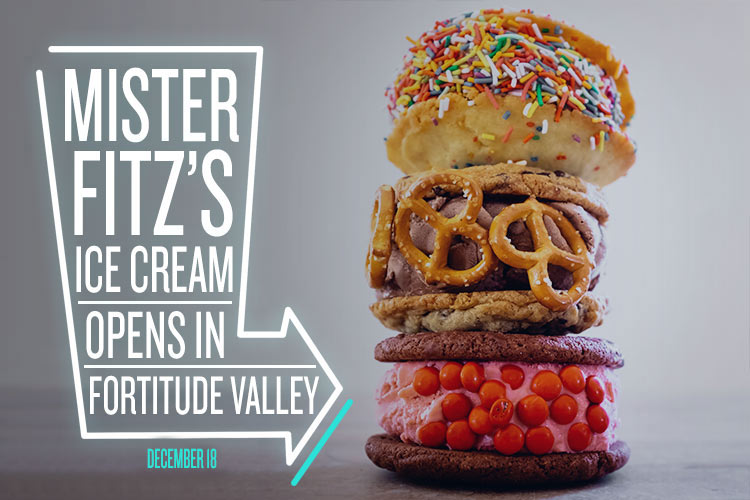 Brace yourselves Brisbanites, because we’ve got some pretty exciting news for you. Are you braced? Alright, here it comes.

That’s right, the mastermind behind Doughnut Time, Les Bubbles, Limes Hotel, Chester Street Bakery and other such wonders is turning his veritable powers to the admirable endeavour of creating a traditional ice creamery with a modern twist.

Brilliant Brisbane restaurateur, Damian Griffiths, first came up with the idea when he was sojourning in San Francisco and ran into Juliet Pries, a former actress turned ice creamery owner. According to him, it left him longing for the good old days of “how ice cream used to be made.” Apparently, Griffiths’ grandmother used to make ice cream from scratch, so we certainly can’t blame him!

So, what makes the ice cream at Mister Fitz different? Well, for one thing, they use an original (and probably very secret) ice cream recipe that is then hand-crafted into perfection using fresh milk, cream and free range eggs. They even pasteurise their own product in-house so you know exactly what you’re getting.

Oh, we almost forgot. There’s more than just ice cream at Mister Fitz’s. We tried to get them to tell us exactly what was on offer but that’s all being kept very much under wraps. That said, we have been told to expect mind-blowing ice cream sandwiches, melt-in-your-mouth cookies, mouth-watering brownies, and a whole lot more.

If you want to find out what else is on the menu, then you’ll just have to head on down yourself! Mister Fitz is slated to open on Thursday December 18 at 3:00pm on the dot. Simply wander down behind Les Bubbles on Little Street in Fortitude Valley.

If this is a little out of your travelling zone, fear not! The enterprising Griffiths plans to open a second location in South Bank in a matter of weeks – in fact, construction has already started.

Mister Fitz will be open seven days week from 10:00am until late, which is a relief because how else would we get our late-night ice cream fix? We also recommend you get there early, though, because with temperatures heating up, this is definitely one name (and taste) that’s going to be on everyone’s lips.